Last edited by quiet marverick on Tue Mar 18, 8: What I still can’t understand is how you know which are the valley-folds and which are mountain-folds from the crease pattern.

Many thanks to Alexander for his contribution and labours Its so fun to look at the model and make some adjustments! Paper was to thik and it was to small, but it turned out well.

It should be up in about a week or so, after its been proofed and tested by one of my folding friends. God, I wish I had indesign My own personal advice: Thanks Alexander for your great help! Dwadf has thoughtfully labored to create this 3 part series that is extremely well done.

It will help you get the basic shape sorted, highlighting what I consider to daarf key steps, but the wet folding and finishing will be down to you.

Please give me criticism and tips on the models i fold, i learn alot from it! And, of course, it will be free! Of course, one does need to bring along patience, dedication to detail, a large, thin paper, and develop a smidgen of artistic sculpting ability.

The only limit in origami is your imagination and your patience My Flickr: We’re all stories in the end. By the way, can anyone help me figure out the Dwarg of the dwarf playing the trombone: Time for a rest and then a new project.

So if you like to see it or have problems with the details here is the first video: Google [Bot] and 2 guests.

I really recommend you all to give it a try! Erc, attempting to fold the dwarf several times will allow you to learn from your mistakes, and persistence will increase the chances of eventually having the model that is satisfying. By the way, on the topic of figures with fingers and faces is anyone else also a jiosel fan of Jun Maekawa’s devil from Genuine Origami and Fernando Gilgado Gomez’s elf from Papiroflexia Magica? 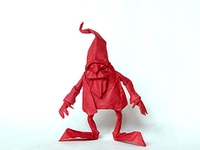 I have to admit I did not fold purely from the CP. Finally here is the last part: I must have looked rwarf your wonderful photos and attempted to replicate my favorites. Thanks to everyone who posted advice!

I’ll film and upload the last part today or tomorrow. I did the skirt seeing the photos of the dwarf. I see that Gonzalospinettte was successful in making a similar model, but no matter how hard I tried, I couldn’t get in touch with him to get more info about the model and how he made the Cp of joissel model. With a little help from this thread, I managed to fold it.

Check out my gallery and don’t forget to leave a comment! I’ve read just about everything there is to read about crease-patterns, and I don’t get how you guys are doing this.

Yeah, but a 24 grid you don’t end up with many flaps to shape the details on the face. I used a popular jisel of wrapping paper in Vietnam.

Board index All times are UTC.